,stadtprojektionen I‘ took place in the city center of St.Gallen in November 2016. 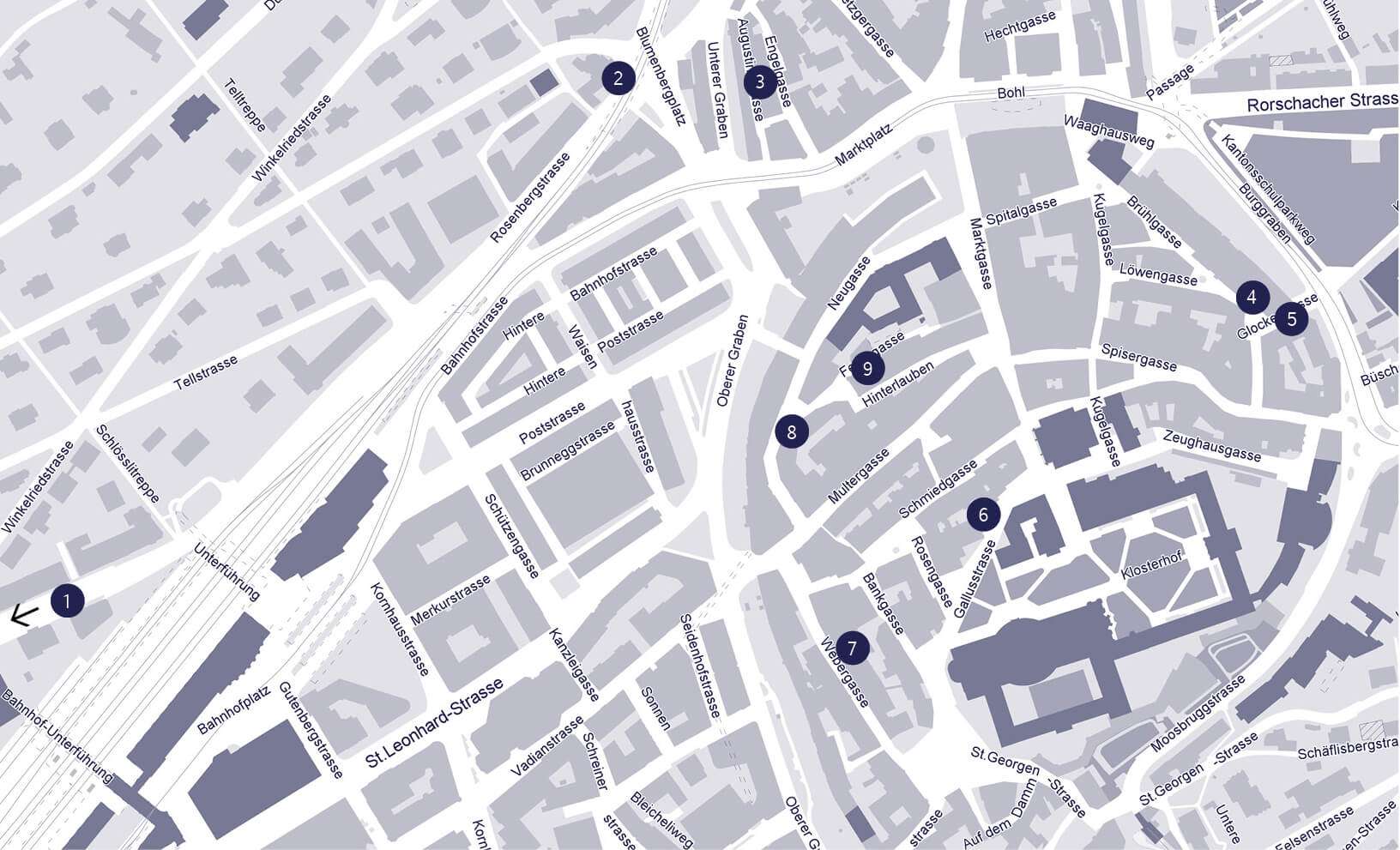 During the first edition of ,stadtprojektionen,‘ works by seven artists were projected on various walls in the city center on the evenings of November 3 and 4, 2016. The focus geographically was on shopping streets, which are often deserted at night, the old city, and the Nord Bahnhof (train station) site, which has undergone substantial changes in recent years with the construction of the university of applied sciences. In addition, ,stadtprojektionen I‘ also lured people into quiet back alleys and courtyards and was presented at intersections, where urban nightlife takes place. With temporary visual modifications, “stadtprojektionen” made reference to various needs and activities in public space as well as to contemporary structural changes in the city such as the many vacant shops. The projections made reference to the history of individual buildings or projected new narratives on them.

Two tours took place within the framework of ,stadtprojektionen I.‘ The opening was rung in at Deportivo Español. The Spanish club is located in a courtyard building at Glockengasse 4a, which was erected in 1905. The ground floor originally served as an exhibition space and workshop for measuring and bottling wine, and the upper floor, where the opening took place, as a space for lantern-keepers.

,stadtprojektionen I‘ presented the works of seven artists who work in the mediums of film and photography.


On the façade of the Spanish clubhouse, Stefan Indlekofer presents a series of fleeting observations from day-to-day life: he photographed situations with people walking or waiting, as take place thousands of times and yet only occur one time in a particular constellation. The photos were taken in St.Gallen and other places. The specific locations do not play a significant role for the photographer; what interest him are everyday life and its aesthetics. As a result of his perspective, things that surround all of us are given a different presence—or even staging.

The series of photos on Augustinergasse might seem familiar to one or the other viewer: they show stills from the film ,Les Nuits de la pleine lune‘ (Full Moon in Paris) of 1984 by the French film director Éric Rohmer. The film deals, among other things, with the exodus from the city center to the periphery and back again. The often-larger fields of colors and forms thus enter into dialogue with the rough, haptic, plasterwork façades of the buildings. With the projection between two square window frames, new views open up—into the distance, but also into interior spaces. With her work, Zhang arouses longings—as she also does with the work ,All the elements are unusually congenial to me (Desnivel),‘ a film about a roe deer, projected on the façade of the Palace, a concert and discussion venue.


The film ,Kreisel‘ (Traffic Circle) by Sebastian Stadler can be seen on the exterior wall of Brühlgasse 37. Projecting a film at this location makes reference to the building’s former use: it was the Kino Corso, which closed in 2012. The film shows clear pictures, but nevertheless cannot be comprehended for a time. By means of uniformly slow film footage, in this work Stadler brings various traffic circles to the attention of viewers. As in other works, the artist here also addresses the seeing and/or not-seeing of everyday circumstances. It is first the street lamps that appear now and then in the picture that give an indication that the film can be situated in the streetscape.


At Glockengasse 4a, one can see photos from the series ,Boarded-Up Houses‘ by the Austrian photographer Katharina Fitz. Since this year, she has been living in Nottingham, where she has occupied herself with uninhabited houses. The series being presented focuses on the former brick workers’ houses that were constructed during the industrial flowering in cities such as Nottingham, Manchester, and Liverpool. Today, many of these houses are vacant—whether due to the decline of industry or the collapse of the property market. Fitz shoots single, frontal photos of the exterior of such houses, which were often built in city centers. At the same time, her photographs always contain parts of the surroundings as well and thus make visible the fact that not only individual houses, but also entire neighborhoods are deserted. With ,Boarded-Up Houses,‘ Fitz makes reference to the fact that changes in society are also manifested visually in urban space.

Emil Meier’s photographs deal with the topic of displacements. A found or arranged situation serves as the artist’s starting point for a work. Meier photographs such situations and then projects the photos onto the original situation. Such superimpositions can be seen on the Stadthaus (Gallusstrasse 14) and the Debrunner building (Feuergasse 1).

Viewers are confronted with two projections that fill the entire wall, which show the building located behind them and simultaneously make them vanish behind the photo. Meier’s installative photographs generate a plasticity that gives rise to tensions that play with the personal perception of the picture of reality in the picture itself as well as in viewers.


Federico Torra’s series of photos of windows can be seen at Webergasse 9. They show real windows of familiar as well as unfamiliar buildings or spatial constellations whose paraphrasing suggests the concept of windows. With the window series, the photographer addresses the topic of transitions between indoor and outdoor spaces and inspires examining them with respect to their qualities. In his work, Torra is interested in the interplay of architecture with its respective surroundings and in the traces that people leave behind on the surfaces of buildings over time. His photographs make a reserved use of color and are serene in their composition. A frequent component of Torra’s photos are shadows that are cast, which give rise to moments of confusion regarding the perception of the actual structural forms.


On a stripe-like concrete extension over the ,Rituals‘ cosmetics shop at Neugasse 43, Yelisaveta Staehlin’s sentence ,Berühren heisst nicht, dass man auch berührt‘ (Touching does not mean that one also touches) appears in black letters. With the projection, Staehlin alludes directly to the situation of the building at Neugasse 43. Above the ground floor, it is possible to see the still intact façade of the magnificent Art Nouveau building, which is visually separated from the recently revamped ground floor by the striking concrete stripes. Looking up at them makes clear that parts of buildings that are found above people’s natural field of vision frequently go unnoticed in everyday urban life. The handwritten sentence by Staehlin also allows for other associations—touching can thus also be read in connection with the use of the products in the cosmetics shop.

Our heartfelt thanks go to all the artists; to Rahel Vetsch for the webpage; to Max Frischknecht for the flyer; to Clemens Waibel and Gianluca Trifilo for the technical support. We would also like to thank the city police and all the building owners and tenants.

The first edition of ,stadtprojektionen‘ was generously supported by: